Please moveon.org back to Ann Arbor - on second thought, make that Cuba 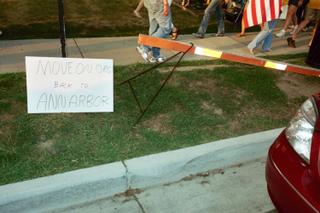 What has dominated the news recently is Cindy Sheehan and her camp down in Texas demanding to meet with President Bush. Now, what the media has not reported is that Cindy Sheehan already has met with the President once. I have sympathy for her and her family over her son who died in Iraq. I'll leave that part at that. I'll just say than a man or woman can be judged by the company he or she keeps.

Now what bothers me about these extremists and political hacks like Code Pink, Moveon.org, David Duke, Fred Phelps, Daily Kos, Democratic Underground, etc, who jump on this bandwagon, not because of sympathy for her, the troops or for any positive reason. They don't give a damn about the soldiers. All they care about is embarassing President Bush, and will do ANYTHING possible to make him look bad. 2004 is over. Howard Dean and Dennis Kucinich lost the primary. Get over it. Bob Alexander lost almost 2-1. Get over it. President Bush won - get over it. He'll be gone in 2008. This country survived Jimmy Carter and James Buchanan of all people. We'll survive Bush, and whoever is next, regardless if it is my choice Mark Sanford or my complete opposite in Barbara Boxer.

If these leftist poltical hacks and pawns supported the troops and were patroitic, they would keep their damn mouths shut about the war until our soldiers are home. That goes for anyone, and WHOEVER is president - Bush, Clinton - whoever. Once our troops are in harms way, they need our support until they are home - and supporting them means supporting their mission. We all want our troops home. The fastest way to so is to support them completing their objective. Once our troops are home, then is time for us all to look at the evidence President Bush and Congress had in making their decision, and decide whether it was the right decision or not, and learn from it in the future.

These political hacks and their pawns do NOTHING to support the troops. They are also indirectly DELAYING the time it takes for our troops to come home as the enemy sees the protests. This fuels them, raises their morale, and hurts the morale of our troops. If you support the troops, support their mission, or at least keep your damn mouth shut, get the hell out of their way, and quit helping the enemy. Protest all you want when our troops are all home, but wait until then. That goes for any political hacks on any side of the isle when the president is of a different political party. I don't care if Bill Clinton is president or President Bush is president. Politics MUST stop at the borders.

Speaking of hacks, those wingnuts at moveon.org (led by the secretary of the County Democrats) invaded Howell here in Livingston County last Tuesday. They had a protest rally under the disguise of supporting "peace" and support. The Kos and DU people are all having a fit since many people who do support the troops countered their rally. At least 60 supporters were there almost evening out the opposition, which is remarkable since there was only two days notice, compared to the the long planning by the moveon people. I also noticed that not one American Flag was flown by the moveon people there.

On a positive note, major Kudos to Wendy Day(prayers to her husband serving our country in Iraq), Vicki Fyke, and every single one of the individuals who showed up to support the troops there. One serviceman was there currently on leave from Iraq. Good luck and Godspeed. The pictures below are from those who support our troops and their mission. 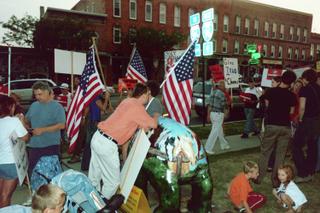 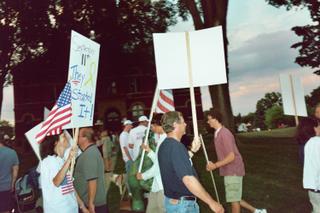 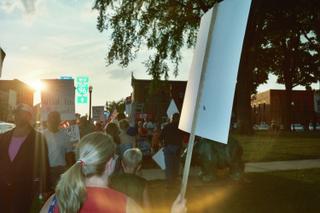