It's a busy week, so I'll condense all of this into one post.

First off, a real scumbag got charged in this. From the Detroit News:

A 12-count warrant has been issued against a Lathrup Village abortion clinic accused of improperly disposing of medical records, according to Southfield's 46th District Court.

The clinic, WomanCare, came under police and state investigation last spring when an anti-abortion group reported finding medical records and biomedical waste in Dumpsters outside the facility on Southfield Road. Authorities soon came and hauled away blood-soaked gauze and surgical instruments that were in the trash.

Secondly, we have bad news from Kent County. Chronic Wasting Disease is found at a deer breeding facility. Hopefully, it doesn't hit the wild population. From the DNR

The state has quarantined all POC facilities, prohibiting the movement of all - dead or alive - privately-owned deer, elk or moose. Officials do not yet know how the deer may have contracted the disease. To date, there is no evidence that CWD presents a risk to humans.

DNR and MDA staff are currently reviewing records from the Kent County facility and five others to trace deer that have been purchased, sold or moved by the owners in the last five years for deer and the last seven years for elk. Any deer that may have come in contact with the CWD-positive herd have been traced to their current location and those facilities have been quarantined.

"Michigan's veterinarians and wildlife experts have been working throughout the weekend to complete their investigation," said Don Koivisto, MDA director. "We take this disease very seriously, and are using every resource available to us to implement response measures and stop the spread of this disease."

CWD is a fatal neurological disease that affects deer, elk and moose. Most cases of the disease have been in western states, but in the past several years, it has spread to some midwestern and eastern states. Infected animals display abnormal behaviors, progressive weight loss and physical debilitation.

Current evidence suggests that the disease is transmitted through infectious, self-multiplying proteins (prions) contained in saliva and other fluids of infected animals. Susceptible animals can acquire CWD by direct exposure to these fluids or also from contaminated environments. Once contaminated, research suggests that soil can remain a source of infection for long periods of time, making CWD a particularly difficult disease to eradicate.

Michigan's First Case of Chronic Wasting Disease Detected at Kent County Deer Breeding Facility: "Currently, one of our top concerns is to confirm that the disease is not in free-ranging deer," said DNR Director Rebecca Humphries. "We are asking hunters this fall to assist us by visiting check stations to allow us to take biological samples from the deer they harvest, so we can perform adequate surveillance of the free-ranging white-tailed deer herd in the area."

Deer hunters this fall who take deer from Tyrone, Solon, Nelson, Sparta, Algoma, Courtland, Alpine, Plainfield, and Cannon townships will be required to bring their deer to a DNR check station. Deer taken in these townships are subject to mandatory deer check.

The deer that tested positive at the Kent County facility was a doe that had been recently culled by the owner of the facility. Michigan law requires sick deer or culled deer on a POC facility be tested for disease. The samples from the Kent County deer tested "suspect positive" last week at Michigan State University Diagnostic Center for Population and Animal Health, and were sent to the National Veterinary Services Laboratory in Ames, Iowa last Thursday for confirmatory testing. The positive results of those tests were communicated to the state of Michigan today.

Audits of the facility by the DNR in 2004 and 2007 showed no escapes of animals from the Kent County facility were reported by the owner. Also, there were no violations of regulations recorded during the audits.

Since 2002, the DNR has tested 248 wild deer in Kent County for CWD. In summer 2005, a number of those deer had displayed neurological symptoms similar to CWD; however, after testing it was determined the deer had contracted Eastern Equine Encephalitis.

Macomb and Oakland Counties are going to be big targets for both campaigns this fall. A Democrat polling firm has the county race at 46-39 McCain. That's early to tell, but if McCain can take Macomb by 5-10%, he's in good shape. Oakland is also a major battle. and the Detroit News covers that. I'll have more on both counties later on. I think Obama's personality, lack of experience, and extreme radical views will not play well in Macomb County. Oakland will be a more split area I think. It's one of the most misunderstood counties in the state.

Oakland County is a geographically split county that is be divided in to about four sections (to be simplistic).

Southeast - Inkster Rd east to Dequindre, and from about 13-14 mile southward. This is the main Democrat Base. Southfield leads the way with a 30,000 vote cushion for the Democrats. Lathrup Village, Oak Park, and Southfield are the mostly black areas. The rest of it is white social liberals (outside maybe Hazel Park which is also democrat) in Ferndale, Huntington Woods, Pleasant Ridge, Royal Oak, and Madison Heights.

Pontiac/Auburn Hills/Waterford - Pontiac is the other Democrat base. Auburn Hills leans that way and Waterford is competitive.

Outer areas - West of I-275 or about 3 miles north of M-59. On the West, South Lyon, Milford, Highland, Commerce, White Lake. On the North Lake Orion, Oxford, and Clarkston areas. That is the Republican base, and Bush ran up big numbers here (outside Novi) while he struggled in the rest of the county. It is a mix of suburban and semi-rural areas that are mostly residential.

That's a simplistic diagram of Oakland County, but a good starting point if someone really wants to analyze our neighbors. 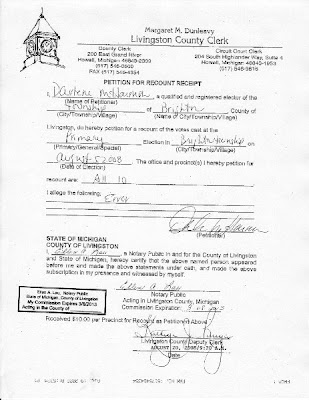 Now what's wrong with this picture?
1. It does not mention the office requested for the recount. All 10 precincts for what office?
2. What is the "error?"

Now I've heard a few other things as well that makes me think this won't get off the ground. I want to verify by primary source first (non 2ndhand/3rdhand) however, before I post it here.

Scumbag? For improperly disposing of medical records? Wow. Where is your outage against the daily dioxin releases from Dow’s Midland plant that have contaminated local rivers, the Saginaw Bay and Lake Huron?

C.G. It's outrage. I thought you stated you worked @ news papers. You should have your MOM check your writings before you post

Thanks for the correction, hate America. I don't have a copy editor and editor anymore. Plus, my mom lives an hour away. So, where is your outrage against the daily dioxin releases from Dow’s Midland plant that have contaminated local rivers, the Saginaw Bay and Lake Huron?