One of the biggest issues in Michigan is the outsourcing of jobs out of the United States to Mexico and China. NAFTA and GATT were bipartisan screwings of our manufacturing base, as well as to our sovereignty as GATT placed the US under WTO jurisdiction. When it comes to those issues, Ross Perot, Pat Buchanan, David Bonior, Ron Paul, Duncan Hunter, and Jesse Helms were right. Bill Clinton, Al Gore, George W Bush, and Bob Dole were wrong. I do not oppose TRUE free trade, but I support this type of governmental managed trade that puts our manufacturers at a disadvantage to other countries whose manufacturing is propped up by our government.

Here in Michigan, being tagged as an outsourcer is political death. It was what hurt Dick DeVos, even though his goods made in China were for use by the Chinese. That did not matter. Rick Snyder was at Gateway from 1991-1997. In 1991, he was Executive Vice-President. In 1996, he was the President. While Snyder was in a leadership position, Gateway outsourced the computer components. This is not a shocker as almost all computers are made outside the US, for better or worse. It's also done extreme harm to our manufacturing base. This is Michigan. Our backbone is manufacturing, and for all this talk about diversifying the economy, all the talk of the cookie cutter new urbanism and creative class claptrap that Richard Florida types say is our future, we can not throw manufacturing under the bus. Diversifying the economy must include manufacturing.

I found an old Gateway 2000 manufactured in 1995, right before be became President, and while he was Executive Vice President. I planned on opening up the Computer and checking and seeing where the Gateway brand products were made. I didn't have to. I just saw the mouse and the keyboard. 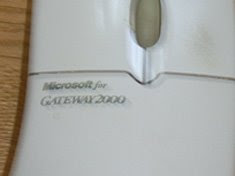 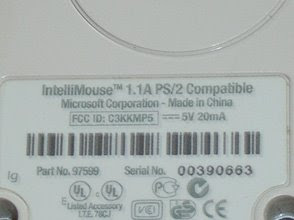 This mouse was made in China, most likely subcontracted to Microsoft (Democrats who love outsourcing) under the Gateway 2000 brand name. You can bet that this will go out to every union hall in the country. More damning however is this. 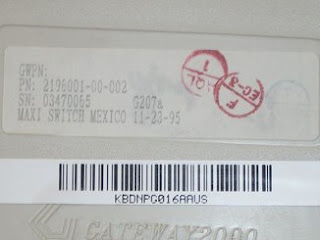 This is not even a subcontract under another brand name like the Microsoft mouse. This was strictly a Gateway Brand keyboard made in Mexico, likely at a maquiladora which is solely made to move manufacturing outside of the original county, in this case, the USofA. Yes, it is a common business practice, but it sure has not been beneficial to us, especially here in Michigan.

Mark this down - If Rick Snyder is the Republican nominee for governor, we will lose this race 57%-40% in another massacre. Social conservatives will stay home (race preferences, Prop 2) or in fact vote for Cherry because of the outsourcing issue if they are Buchanan conservatives. Union independents and Reagan Democrats will vote for the democrat because of the outsourcing. Those with ties to the auto industry will cool on him because of outsourcing. Snyder will not win. Even is you personally support outsourcing, it's no secret what the opinion of it is in this state. Most think like I do on it. It sucks.

Hey guys - will you email me: aliunt@yahoo.com ... want to reach out to you on some issues in Michigan politics.

Business is in business to earn money for its owners and it does so by providing better quality goods and services at a lower price to its customers than its competitors do.
In a state ridden by aggressive labor unions, onerous state regulations and the highest rate of national business taxes in the Western world the only rational decision often is to outsource.
Don't blame the entrepreneurs, blame the politics of the environment in which he conducts his business.
I have better reasons to not support Snyder.

I didn’t pay a lot of attention to most of what you wrote, but this falsehood jumped right out at me. “…”his (Amway Guy) goods made in China were for use by the Chinese.” Not true.

Looks like guru has called you out. You know guru's reputation for the truth...so I guess you've been told.

I mean when guru says "not true," what else needs to be said?

My reputation for the truth is unblemished, especially from the likes of you, brett.

Lake Grande Condo is a 99-years leasehold Jurong Condo located at Jurong West Street 41 in District 22. With expected completion in mid 2019, it comprises of TBA towers with TBA units and stands TBA storeys tall. It is situated right beside Lake Side MRT Station. Future residents of Lake Grande MCL Land will be able to access the nearby Jurong Point and Taman Jurong Shopping Centre which is a short drive away for some family fun and gatherings. A truly unique lifestyle awaits you

UltimateNutritionz We recommend sports and nutrition supplements based on feedback, side effects and the ability to actually Guid.Know more please go our website.

Phenq coupons , PhenQ is a weight loss agent that helps you lose weight in a matter of weeks. It is amongst the most selling and recommended product that has actually changed the lives of many. The best thing about PhenQ is that through its organic ingredients, it enables your body to cut the extra weight without causing any harm to your health. Apart from its fat reduction properties, the product is also proven to give your body the needed boost to stay fresh and charged all day!

Let me warn you up front - virtually every lottery system out there is total junk. So be prepared for some honest ”lottery review.know more just go our website…

Great information for new guy like me. This shows not only particular heck but also give idea about. Thanks for sharing this information. How to download instagram videos free

Making cooking a little easier. It's hard, it takes time and who's got the time after a long day of work, looking after kids and being on your feet all day ? I bet you don't and neither do I.. making cheap and tasty modern day meal kits the new normal among all the changes going on in our world today. meal kits

“Find Joy, Spread Joy”. At Joy With Jo, we’re on a mission to spread joy through our unique collections of cute novelty earrings and enamel pins. We’re inspired by our love for all things fun and quirky, and driven by our passion for the past decades. Our specially curated and handmade jewellery and accessories are fun to wear so you can now add a touch of ‘you’ to your everyday style. From ravishing roses to flirty flamingos, these little adornments were made to ensure there’s never a dull moment in your life. After all, it’s the little things that matter the most, wouldn’t you agree? So wear your favourite colours. Mix and match with your favourite ensemble or wear matchy-matchy outfits. Whichever way you please, have fun dressing up to your heart’s content and add more joy to your day!