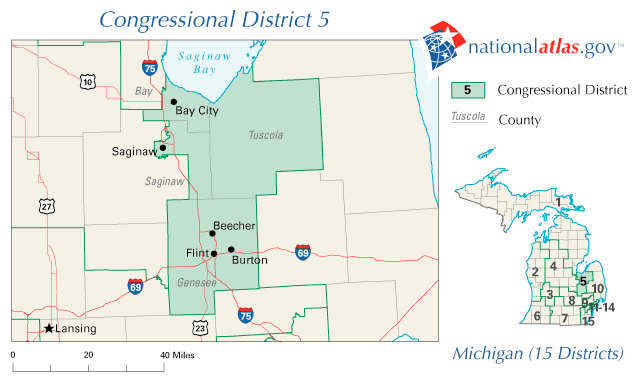 This was a gerrymandered district to keep Dale Kildee safe and to protect Mike Rogers, Candice Miller, Thad McCotter, and to buy time for Joe Knollenberg (I'll never understand putting Royal Oak in that district). Kildee's been around a long time and outside of 92-98, always got 60%+. In the 1990's, he was in a potentially competitive district that covered Flint, Burton, Davison, some other townships, part of Grand Blanc, Southern Lapeer County, and Northern Oakland County down to Pontiac. Kildee survived them, due to labor support, minority support (Flint and Pontiac), and pro-life support. Kldee got 54% in 92, 51% in 94, 59% in the democrat year of 96, 56% in 98, and 61% in 2000. Before and after that redistricting, he never had less than 67% of the vote (2004 was his worst showing outside of that period. I think Bush actually may have won the old 9th in 2004 (parts of the 5th, 8th 10th, maybe 11th). In this district, it's not close.

The post 2002 district isn't that large. It's a compact area of mostly democrats. That's its intent, and it delivered. The 5th District covers all of Genesee County and Tuscola County, along with Bay City, Bangor Twp, City of Essexville, Frankenlust Twp, Hampton Twp, Merritt Twp, part of Monitor Twp (minus precincts 3 and 5), and Portsmouth Twp in Bay County. In Saginaw County, it covers Birch Run Twp, Blumfield Twp, Buena Vista Twp, City of Frankenmuth, Frankenmuth Twp, City of Saginaw, Part of the City of Zilwaukee, and Zilwaukee Township. Genesee County is the 3rd most democrat county in the state behind Washtenaw's one-two punch of Ann Arbor and Ypsi, and Wayne County with the most democrat city in the entire country in Detroit.  (Usually the order is Wayne, Washtenaw, Genesee, Ingham, Muskegon, Gogebic, Bay, Saginaw, Kalamazoo, Isabella, Lake, Oakland, Arenac,) if you combine strength and consistency (last three presidential elections).

Southern Genesee County (Fenton, Grand Blanc) is competitive, as is sometimes the Flushing area. The Frankenmuth area is Republican. Tuscola County is competitive. Flint, Flint Twp, and it's Northern/Eastern suburbs are strongly democrat.Saginaw and Buena Vista are as democrat as Flint. Bay County is mostly democrat.

Kildee's been consistent in the new district. 67% was his low mark and 74% his high mark. He got 70% in 08, and those the the numbers I'll show. I broke up Genesee County to municipalities. Kildee get's Pete Hoekstra types of numbers. The only area he lost was Frankenmuth.


I'll also compare the high and low Presidential water marks of 04 and 08. Bush did fairly well for a Republican in this district keeping  it under 60% for Kerry.

As for the suburbs, I haven't spent a lot of time in Genesee County or Shiawassee County as I do the other neighbors. I don't know all the classifications, so I'll list what's included where in the descriptions.

While the district is almost impossible for a Republican to win, some sections are winnable. Winning those sections are necessary to win statewide. Tuscola County and Southern Genesee County need to be won. Western and Eastern needs to be narrow losses or better yet, won. The losses elsewhere need to be reduced.

The farm club here as expected favors the democrats. The GOP has some representation, mostly from districts based outside the 5th. It may factor in depending what happens with redistricting, most notably to Tuscola County, Frankenmuth, Grand Blanc, and Fenton.

St. Senate 32nd - Covers Saginaw and Gratiot Counties. This is a seat almost everybody expected to go democrat in 2006. Mike Goschka had a lot of cross party support and used it to win a similar district in 1998 and won the current district in 2002 relatively easily against former St Rep Mike Hanley. 2006 was open, and Roger Kahn won because of his victory spread in Gratiot County was larger than his defeat in Saginaw County. Both counties were close and the final number was 450 votes.


St. Senate 31 - Arenac, Bay, Huron, Sanilac, and Tuscola counties. Only part of Bay County and Tuscola County is in the district. Jim Barcia I believe is from Bay City, and represented much of the 5th when he was in congress. If Kildee retires, Barcia will be a frontrunning. This seat is open and should be a barnburner for election.

St Senate 27 - Argentine Twp, Clayton Twp, City of Fenton, Fenton Twp, City of Flint, Flint Twp, City of Flushing, Flushing Twp, Gaines Twp, Genesee Twp, City of Linden, City of Montrose, Montrose Twp, Mundy Twp, and the City of Swartz Creek in Genesee County. This is a solid democrat district thanks to Flint (city and Twp and Genesee Twp. It is the most democrat State Senate district in the district. John Gleason is a moderate democrat who won the open seat replacing Bob Emerson.


St Senate 26th - Covers Atlas Twp, City of Burton, City of Clio, City of Davison, Davison Twp, Forest Twp, City of Grand Blanc, Grand Blanc Twp, City of Mt. Morris, Mt Morris Twp, Richfield Twp, Thetford Twp, and Vienna Twp in Genesee County. Covers Brandon Twp, Groveland Twp, Springfield Twp, and Waterford Twp in Oakland County. This one caught a lot of people offguard. It was created for Deb Cherry, who ran for the open seat in 2002 to replace her brother John. Everyone assumed it would be an easy race, probably with numbers similar to Emerson. Her opponent was John Muller, who was treated  as a sacrificial lamb. Muller won everywhere in Oakland outside of Waterford which his narrowly lost. He won Atlas Twp and almost took the city of Grand Blanc. In the end, it was a 55-45% race. 06 was well, 06, and this seat really wasn't that strongly contested. 2010 is another story. Deb Cherry is termed out. John Cherry I believe is also termed out. This seat is winnable for the GOP. Kerry won it by less than 1 percent in 2004. Dave Robertson of Grand Blanc is running for the GOP and has my support. Robertson worked hard at three tough races in his old district. Tough races are not new for him.

Most of this district is in the 5th district, including Bay City. Auburn, the Midland portion, two precincts of Monitor Township, Portsmouth, and Williams Townships are in the 1st.  Jeff Mayes, the incumbent, is from Bangor Township which is in the 5th District. This is not a liberal district, but it is a democrat district. Pro-life and pro-gun democrats are very common here.


State Rep 95th - Covers Bridgeport Twp, Buena Vista Twp, the City of Saginaw, and Spaulding Twp. This is the main democrat district in Saginaw County. Most of it is in the 5th district. It is anchored by the City of Saginaw, although Buena Vista Twp is actually more democrat. It is probably about 50% minority. It is represented by Andy Coulouris who won an open seat in 2006 vacated by Carl Williams who ran for state senate.

State Rep 94th - Covers Albee Twp, Birch Run Twp, Blumfield Twp, Chesaning Twp, City of Frankenmuth, Frankenmuth Twp, James Twp, Maple Grove Twp, Saginaw Twp, St Charles Twp, Swan Creek Twp, Taymouth Twp, and Thomas Twp in Saginaw County. It is a competitive district that has been GOP since Jim Howell won it in the late 90's. Most of this district is in the 4th, outside of Birch Run, Blumfield, and Frankenmuth that is in Kildee's district. Frankenmuth is the most Republican part of the county, and helps counterbalance Albee, Taymouth, Maple Grove, and Chesaning.

St. House 84th - Covers Huron and Tuscola Counties. This is a competitive district in the thumb. It was Mike Green's district, then Tom Meyer's district. Meyer narrowly won in 2002 as an incumbent. Terry Brown then won the district as an open seat. This is a seat that will need to be picked up for the GOP to retake the Michigan House.


St. House 51st - Covers Argentine Twp, Atlas Twp, City of Fenton, Fenton Twp, City of Grand Blanc, Grand Blanc Twp, City of Linden, and Mundy Twp in Genesee County. This is a district where the GOP has won the last four races, but by the skin of their teeth. Dave Robertson won the new seat after redistricting against incumbent democrat Patricia Lockwood. He held on for two more terms and is running for state senate. Paul Scott in somewhat of an upset, won the open seat in 2008. This is a seat that needs to be kept if the GOP will keep the house


St. House 50th - Covers the city of Burton, City of Davison, Davison Twp, Genesee Twp, and Richfield Twp. This is Michael Moore's home district. Davison. It's strongly democrat, anchored by Burton and Genesee Twp. All the areas have some democrat leanings, some more than others. Jim Slezak defeated incumbent Ted Hammon in the primary of 08.


St. House 49th - Covers part of Clayton Twp, part of the City of Flint, Flint Twp, Gaines Twp, and the City of Swartz Creek in Genesee County. It's the "whiter" district of Flint (to comply with voting rights act and minority representation).It's solidly democrat, and opens up in 2010. I'd rather have it be someone similar to Gonzales than a Jack Minore clone.


St House 34th - Part of the City of Flint. This is a black majority district and thus, one of the most democrat in the state. Irony is that 08 was the "worst" state rep democrat showing despite Obama. That's because Woodrow Stanley, the incumbent, has some stronger negatives than Brenda Clack. He was recalled as Flint mayor back in 2002, not that the white guy Don Williamson (now running for governor) was any better. Ford got some of the anti-Stanley vote, although straight tickets dominate the district.

The 5th district is solidly democrat due to Flint, Saginaw, and Bay City. Kildee has the seat as long as he wants it. The question is who replaces him when he steps down. I think Barcia is the likely choice as he was formerly in congress, although Gleason is very strong as well. The best Republicans can likely do here barring a Joseph Cao surprise is to reduce the margins, and pick off a couple of state rep and state senate seats. That certainly is in the realm of possibility. Redistricting will be interesting with this district a well.

Update 5-18-2010
Dale Kildee has a primary challenge from Scott Withers in Tuscola County. Withers is making this issue about abortion as Kildee isn't pro-abortion enough for him. I don't see this getting traction with Kildee's union support and Flint area base.

Your first mention says Dale Camp instead of Kildee.

Thanks for mentioned it. Copy/Paste error. I fixed it.