I'm more of a pitchforks and torches kind of guy than I am a tea party guy, but this will have to do.I'd estimate about 750 there. 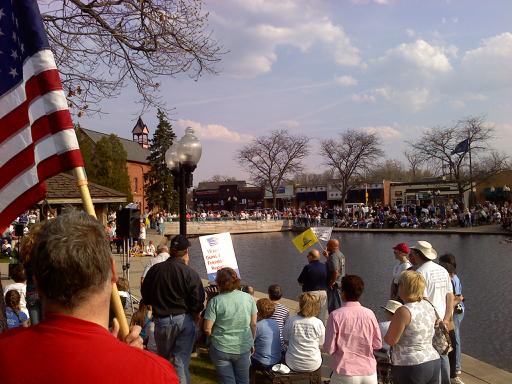 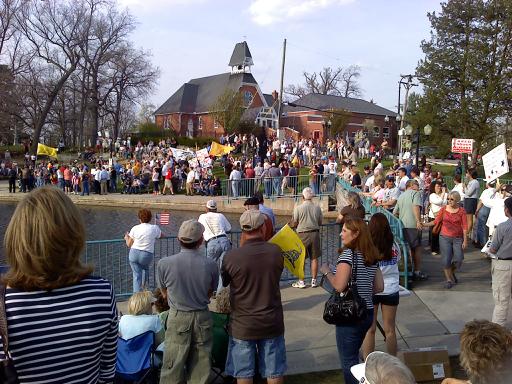 Once again, count on Brighton to take a stand against Big Government, much as we did last September. With the punk in chief railroading the debtor's prison health care deform billthrough Congress, now is the time to fight.

It was a good turnout for a weekday event that started right after the day shift ended. It wasn't like it was when national tea party express came through Brighton, but it was a good event anyway. Joe Hune spoke there and did a good job as usual. I saw Bill Rogers and Cindy Denby there in the background as well.

I could have done without seeing the Lyndon LaRouche booth and their violation of Godwin's Law, but at any event, there will be a few of those types showing up.

Overall, a message was sent. Less government and more freedom. Those that don't support that need to be fired.

I see you have rolled out the talking point, like the debtor's prison. Where are the death panels?

“Punk in chief? Better than a pussy like you.

I’m sure there were plenty of ugly, racist signs that you can blame on Lyndon LaRouche. What’s really sad is once decent people like Rogers, Hune and Dendy would throw in with the likes of teabaggers.

You keep on fighting that lost cause. The health insurance reform bill that has been on the train tracks for some 100 years will not be repealed, and it is not unconstitutional. But you run on that. I hope that’s what Republicans run on.