I knew about the Hawaii and Pennsylvania special elections, but we have another one I forgot about. Florida 19th. Ed Lynch is running against Ted Deutch in the traditionally democrat stronghold. From the Palm Beach Post.

Lynch said his contributions spiked after the House passed the legislation March 21 and again after President Obama signed it two days later. 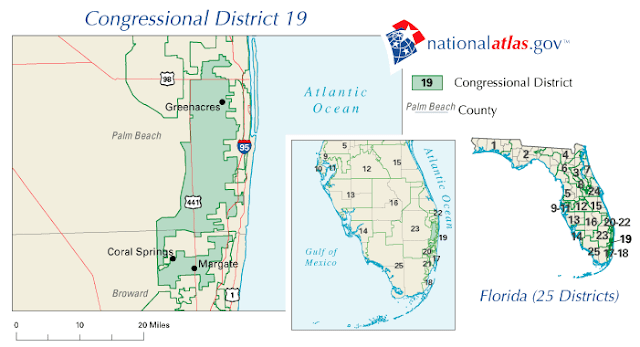 This is possibly the biggest longshot of the three special elections. Robert Wexler, a far leftist democrat, won here seven times. It's treading "republican", and Obama had the lowest total of the three recent democrats in this district, but it's still a democrat stronghold. Palm Beach County and Broward County are democrat. However, as with most special elections, low turnout makes the rules thrown out.

Ed Lynch has a shot to win. Democrats have won districts more republican than this is democrat. Joseph Cao won a special election in a district 10%  more democrat than this. If we're fighting the democrats on their turf, they won't be fighting as much in the swing districts. Now is the time to strike, and special elections put all districts on the table. This is one of them. Good luck to Ed Lynch.

I guess Ed Lynch doesn’t have “a shot to win” considering he lost 61 percent to 36 percent.