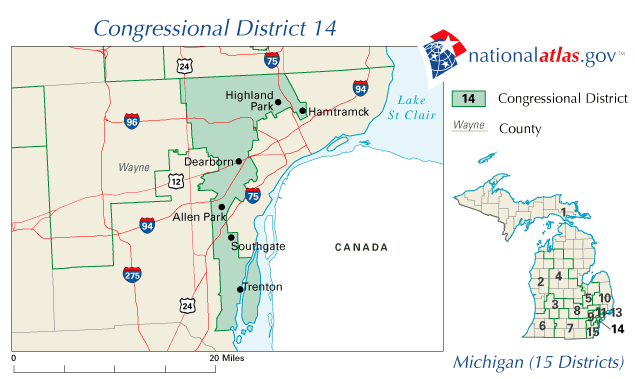 This is one of two black majority "Voting Rights Act" districts in Michigan. The other one is the 13th district which is held by Carolyn Kilpatrick. It covers about 1/2 of the City of Detroit, Allen Park, much of Dearborn, Gibralter, Grosse Ile Township, Hamtramck, Highland Park, Melvindale, Riverview, Southgate, and Trenton.

This is generally the "west side" district and is represented by John Conyers. Conyers only had third party opposition in 2008.

This is an 80%+ democrat district. Detroit itself is consistently 93% democrat - most in the entire country. I'm not going to number crunch this district. I'll get to the farm club here when I go over Wayne County in the county updates. There's only one possibly competitive district here, and that is a far downriver district which I'll cover when I go over the 15th District.

Updated 5-18-2010 - I'm somewhat surprised Conyers isn't getting a primary after the whole Monica Conyers fiasco in Detroit City Hall. It's too bad we have straight ticket crap voting by lazy people. That hurts us bad here.