Feds need to get the hell out of traffic rules 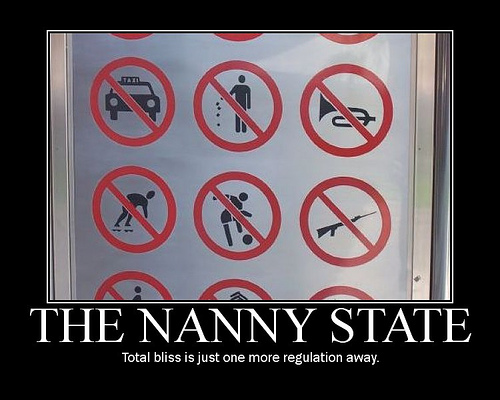 This is the number one problem with Washington. Big government is once against trying to regulate every aspect of our lives. RINO Ray LaHood, Transportation Secretary and Obama lackey from Illinois (where else), is at it again.

Between this and the new TSA crap (Full body scanners and groping....but no profiling of course...got to be politically correct), I'm about ready to violate Godwin's law. I hate Illinois Nazis.

From the Daily Caller

Transportation Secretary Ray LaHood said using a cell phone while driving is so dangerous that devices may soon be installed in cars to forcibly stop drivers — and potentially anyone else in the vehicle — from using them.

“There’s a lot of technology out there now that can disable phones and we’re looking at that,” said LaHood on MSNBC. LaHood said the cellphone scramblers were one way, and also stressed the importance of “personal responsibility.”

The hosts of Morning Joe pushed the secretary about the possibility of requiring scrambling technology installed in vehicles.

“I think it will be done,” said LaHood. “I think the technology
is there and I think you’re going to see the technology become adaptable in automobiles to disable these cell phones. We need to do a lot more if were going to save lives.”

Grab the pitchforks. Who the Hell's business is this of the FEDERAL government in DC? It's not. If local municipalities or states want to push this crap, that's one thing, but it's none of the fed's business. Period.

We also have laws against careless driving, reckless driving, crossing yellow lines, speeding, tailgating, and just about anything else you can think of. We don't need yet another law, especially one from the Feds. I've never gotten into an accident on my cell when I drive, mostly on rural roads. If LaHood over in Illinois or DC has a problem with that, he can go screw himself.

I've had more than enough of this crap from all branches of government, but especially the feds.

When some idiot who is texting and driving or yakking on his cell phone while driving kills someone in your family, you'll be the first to come crying, "There ought to be a law." I urge you to tell the families of the 5,500 killed by distraction crashes last year that they should go suck it. "Nazis," really? Have some shame.

He has no shame.

There is already plenty of laws, on the appropriate level (State and local) regarding traffic. The feds need to stay out.

It's time for people to stop braying "There ought to be a law." and start looking at laws currently on the books. There's too many laws in this country as it is. Both parties have been guilty of that, and things need to start turning around quick. Between the TSA insanity, Chicago's Joyce Foundation connected Andrew Traver taking over at the not needed BATF, the anti-free speech push from the left on talk radio, Obamacare, and the rest of the assault on our freedoms, it's time to put the hammer down and push back.

There’s an anti-free speech push from the left on talk radio? I listen to liberal talk radio all the time, although I have to pay for it, and have never heard this push. As for assaults, the only assaults are coming from the whack jobs on the right. The limits on freedoms occurred during the Bush regime.