2014 - Update (4-24-14)
The filing deadline is in. Benishek has a primary against Alan Arcand, a yooper, and the winner will face democrat Jerry Cannon. Dems are high on Cannon, but I don't see this flipping to a troll who lives below the bridge. This is a "yooper" district even with more population in the lower peninsula because the UP is where there are more independents who will vote based on geography.

Gary McDowell was a good candidate who could have won the district in the right year. Some candidates can put this in major play. Jerry Cannon doesn't scare me.

The Secretary of State released their precinct results out for all state level elections in that area. With that out, I can compare 2012 to 2008 to 2004 presidential elections and comment on trends seen here. This is the first of a look at all of the districts. We'll start with congressional districts, and go all the way down to state rep and then the counties. Eventually.

For Romney, MI-01 stopped a lot of the McCain bleeding. He didn’t do as well as Bush here in 04 in most areas but came fairly close in percentage. Bush 04 did the best here of non wave year candidates in a long time. There’s been a lot of population shifts here in different areas.  Some areas are noticeably moving to the right and others to the left with migration, retirement, fewer yellow dogs, and migration (2nd mention). One thing I noticed in much of these areas are less overall votes. Romney in some areas had less votes than McCain, but had a better percentage than he did, even sometimes rivaling Bush 04 which overperformed this district.

Romney possibly saved Benishek, however that map is so much different than the presidential maps that I really can’t compare them. http://www.redracinghorses.com/diary/2891/mi01-analysis-2012">My preliminary map covers that well.
McDowell overperformed Obama and Benishek underperformed Romney. My comment on Benishek remains this. I don't think Benishek's out of the woods, but I think the fact that he survived against a McDowell (always was stronger than given credit in 2010) in a non-2010 setting and a target on his back was a show of strength. If Benishek can do it again, he should be okay outside of a wave year. What he needs to work on is what Stupak's top strength is. Constituent issues. That takes time, and Benishek should do better there with experience.

Here’s the 2012 presidential map by township/city. 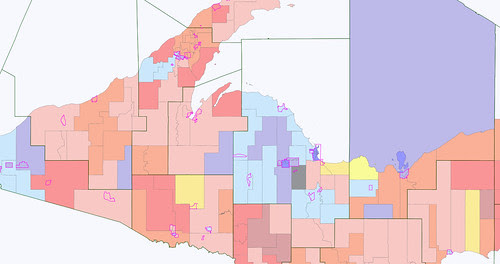 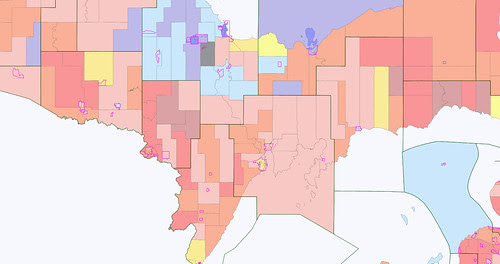 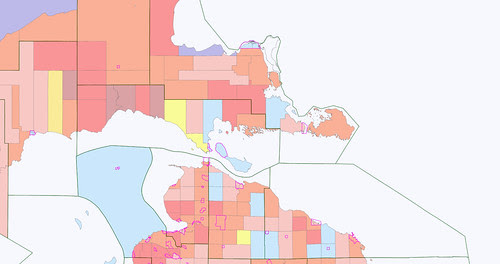 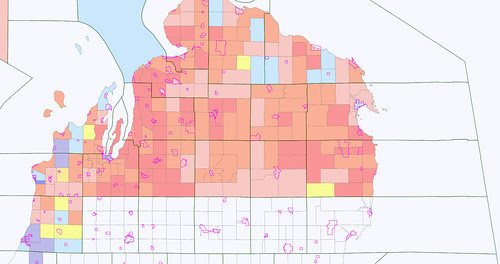 I had to guess a couple of township borders, but most are accurate. (That small part cut off is Mason County - the portion of which Romney won with about 51%) What I like with a regional map that the counties don’t necessarily show is when areas nearby on borders vote similar. Some of the “R” strongholds are deceptive until you see the map. That 60%+ patch of Romney votes in the Eastern UP overlaps part of four counties. Luce, Mackinac, Chippewa, and Schoolcraft. Schoolcraft is historically a democrat area, due to Manistique. One thing to remember is that even in stronghold or historically stronghhold counties, the other party may have a small but significant base. Berrien County and Kent County are two of the biggest example of this in Michigan. Frankenmuth area is another example on a smaller scale.

Even with that, this applies more with top of the ticket. Stupak won ALL of this area. McDowell’s from one of those big red spots in southern Chippewa County. Rudyard. He won it. Romney got 63% there. Bush 62%. I don’t believe in PVI at all. Top of the ticket is important, but so Is historical downticket strength. Alger County was overall 50% for Romney, but is usually blue. Obama got his numbers in Munising, but did not do well at all outside of there.

Marquette County shows how blue that entire county is. It’s not just blue due to Northern Michigan University, but due to the union tradition as well. Ishpeming is as dem as Marquette, at least by percentage. Richmond Township is the king here by percentage. It went 69.52% Kerry, 71.88% Obama08 and even higher at 72.48% Obama12 even as Marquette County went from 59.35% Obama in 08 down to 56.26% (Kerry got 53.60% - difference was largely 900 extra votes for O in Marquette and Ishpeming) Richmond Twp is consistent. The dem raw votes there ranged from 316 to 322 in each election. The R vote dropped from 135 to 107. They probably moved out. I’m not sure how it’s more democrat than Marquette, although it’s the home of the Empire mine.

Gogebic County in the Western UP is a democrat stronghold, but not all of it is. That eastern portion is more tied to Ontonagon County (leans GOP, sometimes goes Dem) and Iron County (was dem stronghold, now swing). Ironwood and Wakefield area dominate Gogebic county. That’s the most yellow dog spot in the UP outside of Marquette and is an old (former) mining area. Superior Wisconsin and Duluth are probably an influence there as well.

Houghton County is treading a little more dem. Bush did well there twice, but Michigan Tech is becoming a tougher as that university is following the others, although to a lesser extent.  Houghton’s about 5% more dem than it was in 04 and that’s put the county now in the lean R instead of safe R category (despite McCain winning it). The suburbs and rural areas are still with us there.

Delta and Menominee Counties are historically democrat, but now swing counties.  Dickinson has been more R than the others for awhile now. I can’t call any non Eastern UP county a base county right now due to history, but if any are about to become one, Dickinson County will. (Houghton was). Even Iron Mountain and Kingsford are going more R. The City of Menominee is still dem (not sure about its neighbor Marinette Wisconsin), as is Escanaba (less so). The rest of those areas are capable of wild swings, although the Stephenson area (Menominee) and Bark River (Delta) are (at least top of ticket) strongholds.

The Eastern UP is historically more Republican, but the dems have some strength in the Chippewa communities. They aren’t as dem as South Dakota’s Sioux, but they aren’t Oklahoma or Eastern Tennessee Cherokee either. Bay Mills (Chippewa majority) is solidly 54-62% dem. Sault Ste Marie swings but has some dem strength in Lake Superior State U. Obama won it twice, the second time with 50%. St Ignace also swings. The township is more dem than the city (rare) due to the Chippewa population. It’s slightly dem leaning, but winnable for R’s. The famous Mackinac Island swings as well.

The Northern Lower Peninsula has a lot of solid R 55-60% territory. Emmet, Otsego, and Antrim are three county strongholds for the R’s, along with the suburbs and rural areas outside of Traverse City. The dems have some strength in the Alpena/Presque Isle area (labor is stronger in NE Michigan), Frankfort area, Traverse City itself (outvoted by townships), and Manistee (more labor than most of NW Michigan). Parts of Leelanau County are treading D, as is Traverse City which attracts a lot of Ann Arbor types. A lot of the resort areas are competitive, but the townships around them often are not as competitive outside of Benzie County and a few areas in Leelanau and Mason Counties. Townships around the more labor influenced areas are more competitive (Manistee, Alpena, Presque Isle). Manistee, Alpena, Benzie, and Presque Isle Counties are swing areas, although Manistee is more D than R except for 04. Leelanau flipped in 08, but came back in 2012. I’ll call that lean R due to history, but keep an eye on it. Alpena County leaned dem, but is starting to go our way. The city itself is now in the low 50% for dems consistently. Presque Isle is usually 1-2% to the right of Alpena.

Both parties have a decent bench here. 2010 took out a lot of the dem bench, but don't write them off for dead. Marquette survived the 2010 wave without a problem. The 110th State Rep seat flipped back (HD-110) thanks to Gogebic County. There isn't much in the lower penninsula, but this is a Yooper based district to this day (and geography still matters here - a dem from Traverse City won't win here).  Benishek will likely have another tough opponent in 2014. We'll see how close that race will be.


With the wild swings at times along with the ticketsplitting, this district leans R at the top of the ticket, and is a swing district downticket.