2014 Update:
Brian Ellis is challenging Justin Amash in the primary. Ellis is running as an establishment social conservative attacking Amash on his abortion and 2nd Amendment votes. Bob Goodrich is a dem sacrificial lamb candidate. The primary could be quite interesting. Amash has a major following, but a lot of detractors as well.

Some pundits that don’t know Michigan always claim that Grand Rapids is the capital of “Republican West Michigan.” That’s not true (Ottawa County is). That hasn’t been true in a long time, if it was even true to begin with. The big Kent County strength of the GOP is in the suburbs. 2/3 of the vote in this district is in Kent County. Redistricting took two of the marginal suburbs out and into the MI-02. However, tougher Calhoun county was added instead. Barry and Ionia Counties are solidly GOP and added. Montcalm County’s Eureka Twp was also added.

A lot of work needs to be done here. In order for Michigan to be competitive statewide again, we need to at least get this back to the Bush numbers in Calhoun, Ionia, and Barry Counties, and better than that in Kent County. 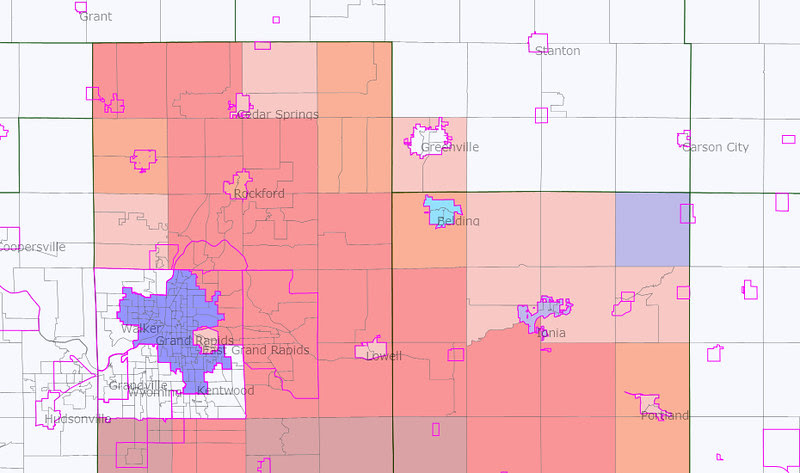 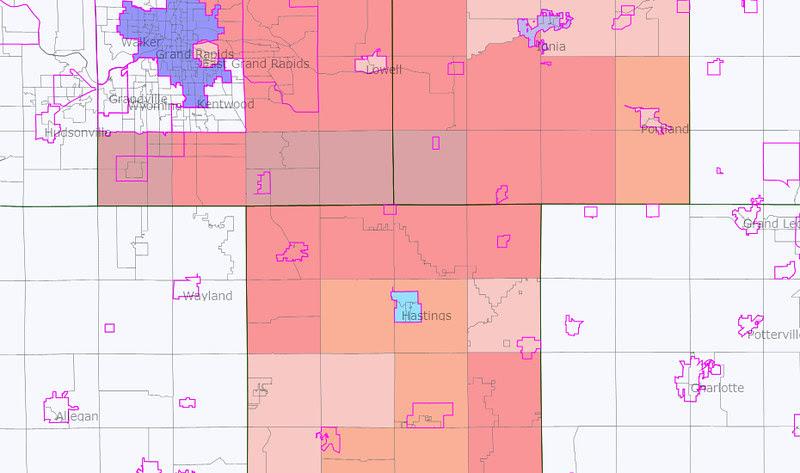 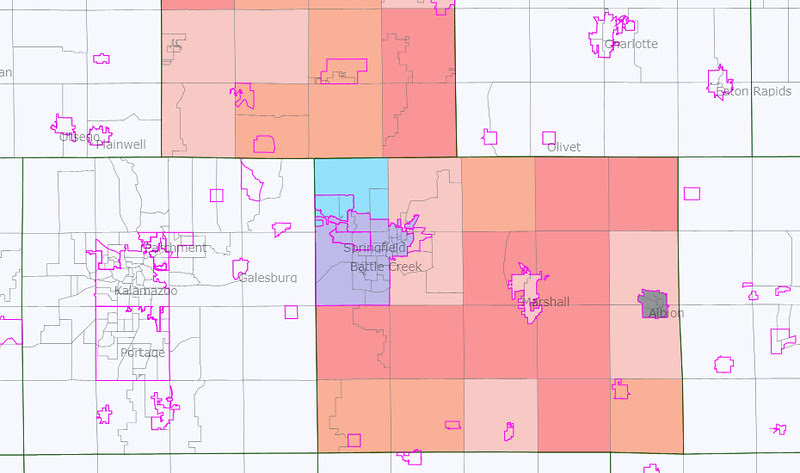 Top of the ticket R’s have taken a beating here compared to the old days. Kent County used to be a 60%+ county for years. Bush was held under 60% twice, winning by about 54,000 (countywide) both times. McCain lost Kent County completely along with the district. That was a disaster. He quit. Michigan hates quitters. Aberration. Romney was held to 53 and won by 17000 in Kent County. Bush had 58% and won by over twice that. Districtwide, Bush won with 57% and had twice what Romney had in the vote spread.

Kent County is 2/3 of the district. Romney recovered some from  McCain’s cratering here, but he did get less votes than him in Lowell. He also only got 400 more votes than him in Grand Rapids. Obama lost ground there, but here’s a comparison. Romney 28772 (35.73%), McCain 28372 (33.00%), Bush 36115 (43.61%). Bush ran about 7000 votes higher in outer Kent County (within the district) than Romney. There’s your main difference in the district.  The only reliable democrat area in the county is the City of Grand Rapids (and arguably now Kentwood in MI-02).

To the east is Ionia County which is between Lansing and Grand Rapids along I-96. It’s most known for the prison. It’s a base R county, although Bush did significantly better here than Romney and especially McCain. McCain was held to a 1500 vote spread. Romney 3300. Bush 6000. North Plains Township is the only area that went D the last three presidential elections, although Obama took Belding and Ionia twice (Bush won it). I’m not sure what’s significant about that area to make it so dem. Bush made it close and lost it by 25 votes. Romney lost it by 89 and McCain 128. Alamingly, Romney had only 150 more raw votes than McCain in the county even though he got 55.57% here to McCain’s 51.64%. Bush got over 60%. Romney had less votes in Belding, Boston Twp, Ionia, Ionia Twp (still flipped it from 08), Odessa Twp, and Orange Twp than McCain despite his percentages being better than McCain in all of them.  Portland on the east is closer to Lansing than Grand Rapids, so this area is influenced by two other areas.

Southwest of Ionia County is Barry County. It’s the county that is the crossroads of several cities in Michigan. Lansing to Kalamazoo/Battle Creek. Grand Rapids to Jackson. It’s usually a base R county. Bush got 59.51% here. McCain cratered here like most of West Michigan getting 53.75%, but Romney in percentage recovered most of it getting 58.41% here. However, Romney still only got 230 more votes than McCain. Obama just lost 2000 votes. McCain had more raw votes in Assyria twp, Castleton Twp, Hastings, Johnstown Twp, Maple Grove Twp, Orangeville Twp, Prairieville Twp, and Yankee Springs Twp. Hastings is quite alarming as Bush won it with 55.72% and Obama won it twice. This is a key county where we need to do well in order to win statewide.

To the South is Calhoun County, a quintessential swing county along the I-94 corridor. It voted for Gore narrowly, Bush narrowly, and Obama twice, narrowly the 2nd time. It voted for dem Mark Schauer several times, but followed up with Mike Nofs, a moderate republican (Social conservative, pro-union) several times. It voted for Granholm and Mike Cox (over Gary Peters) in the same election back in 2002. To say that this is a key county is an understatement. Bush won the county by 2200 votes (51.21%) in 2004. 32093 votes to Kerry’s 29891. In 2004, McCain got 28553 and lost the county by 6000 votes. Obama had less votes than John Kerry the 2nd time, but Romney had less votes than McCain. Obama won the 2nd time by 934 votes (50.18%). Romney only had 28333 votes. That is not a recipe for victory – even as he ran 4% ahead of McCain.

There’s two major democrat areas in Calhoun County. Battle Creek and vicinity is the most well known (and Springfield/Bedford Twp might as well be Battle Creek). Battle Creek is democrat but not to the extent of many other core Michigan cities. Kerry only had 52.66% here. Nofs has won it in the past. Obama got 60.20% and later 57.72%, which is fairly high for the city. Bush got 46.60%, Romney 41.29%. Springfield is more dem than Battle Creek which is somewhat surprisingly since its whiter. Bush came within 3 votes of winning Bedford Twp. The big problem from a per capita standpoint is Albion. Albion is forgotten and much smaller, but the dems in 2004 had a bigger vote spread there (-1278) than Battle Creek (-1269). Kerry got 70.11% there, and Obama 77.39% and 75.80%. Blacks, unions, and Albion college. Marshall is competitive and leans slightly R. Most of the rural areas here are solidly R. They help counter Albion/Battle creek and make this a competitive county.

Overall this district leans R. Amash ran similar to Romney, so he probably has this district unless someone strong primaries him. That is unless we get another wave year like 2008. The key in this district is to drive up the vote in the Kent County suburbs, get Bush numbers in Calhoun, Ionia, and Barry Counties, and to stop the bleeding in Grand Rapids.