2014 Update:
GOP is running Allen Hardwick (R-Ypsilanti) and Tom Whitmire (R-Flushing) to challenge Dan Kildee. While you don't have to live in the district to run for Congress, I think it's real bad form to run for a seat 50 miles from where you live. That would be like me running in Levin's seat.

This district is a real tough go anyway and it will take a Bill Jefferson or Dan Rostenkowski situation to win this district.

This district is mostly a blue sink with some bridges and county split avoidances. Like the 2002 similar district, Genesee County is kept whole while Saginaw County is split. Bay County is made whole this time along with marginal swing counties of Iosco and Arenac which the mapmakers wanted to take away from Benishek. Tuscola County was split some as Candice Miller needed to take more of the thumb as Levin’s district expanded.

Genesee County dominates the district. It’s either the 2nd or 3rd most Democrat county in the state in any given year. That’s due to Flint along with most of its suburbs which are also blue. The bluest parts of Saginaw County are also in this district, as is the more moderate but yellow dog Bay County. Tuscola County is the bridge between Saginaw and Genesee as Birch Run was put in Camp’s district to give him Frankenmuth.

This is a safe D district, and you’ll see how safe it is, despite Dale Kildee’s (Dan’s uncle) scare in the wave year. Between Flint, Saginaw, Bay City, Mount Morris, and Buena Vista, it would take the perfect storm to win.

For the map, I’ll use the same color code, except that I’ll replace the black with dark blue for 70% d areas. 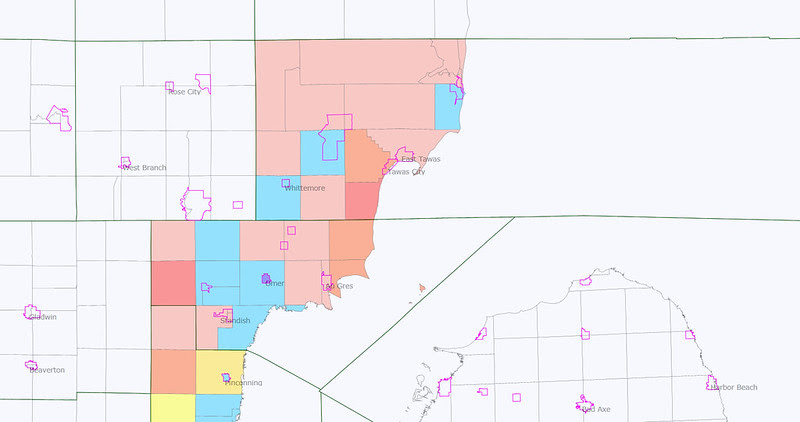 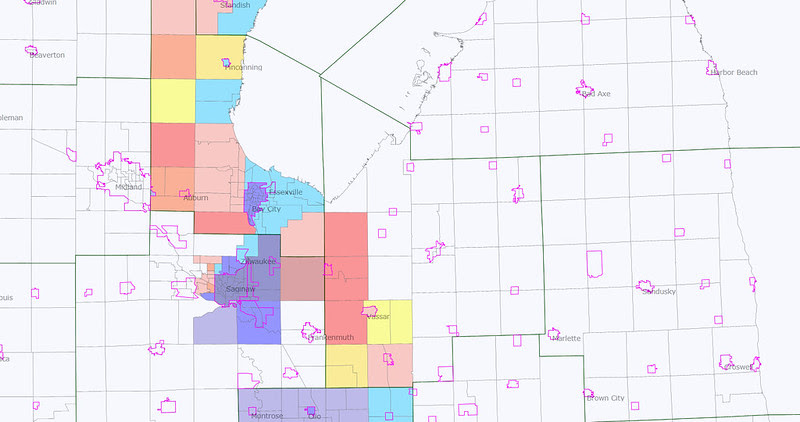 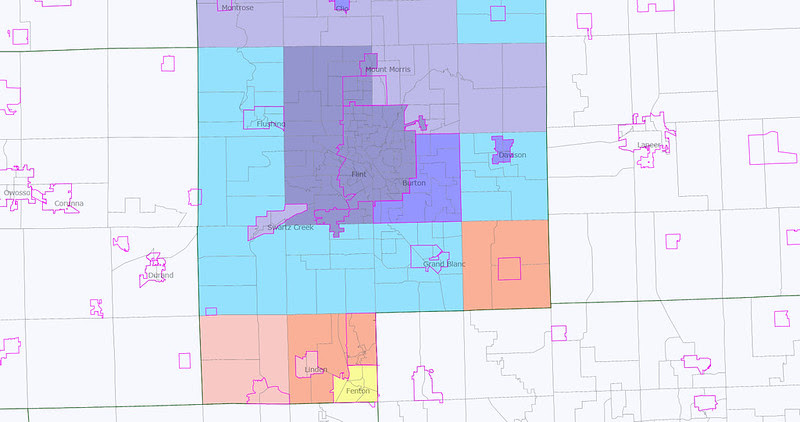 Iosco and Arenac are somewhat similar swing counties. Iosco is more apt to go Republican, although Romney won Arenac, something Bush was unable to do (lost by 5 votes in 04). These are populist counties which prefer Joel Sheltrown or Jim Barcia democrats compared to national democrats. Most of Iosco County is a swing area, although the GOP is strong in Alabaster Twp and Tawas while the dems are strong in Au Sable, Whittemore/Burleigh Twp, and Grant Twp. Arenac is mostly swing as well, but Adams Twp is a deep red island in an otherwise competitive area.  Deep River Twp (Sterling), Arenac Twp/Omer, and Standish Twp (east of Standish) are strong dem areas, usually stronger than in 2012.

South of there is part of Saginaw County. Most of the county is in the 4th, but the major dem parts are here. Blumfield Twp is 70%R and similar to Frankenmuth in voting, and Saginaw Twp can go either way overall, but leans slightly R. That’s the mix of precincts west of the city. Saginaw itself is just getting worse by percentage as whites leave town. 74.02% Kerry to 79.80% Obama to 81.01% Obama. Romney had 400 less votes than McCain. Obama had a 1000 less vote spread anyway, but that’s what makes the county go blue. Bridgeport and Carrolton are going to be more and more trouble as well with migration. Buena Vista Twp is black majority and an extension of East Saginaw.

East of there is a small part of Tuscola County mostly as a bridge to Genesee County so Camp could get Frankenmuth. There’s some strong GOP townships there, as well as dem Arbela twp.

Genesee County shows the story of this district. Flint is 89.03% Democrat now, up from 83.07% in 04 and even 88.13% in 08. Flint Twp just broke 70% D and is going to soon be another Mt Morris Twp (79.69%) due to migration. Romney had less votes countywide than McCain. Most of the light blue areas are just that. Blue. Flushing, Gaines, and Clayton Townships are winnable. Bush won it. Grand Blanc may be gone with migration, but I wouldn’t give up on it just yet. We’re bleeding badly in Davison. Obama broke 60% there which he didn’t do in 08. In this county, the key is to get what we can and win the Southern part of the County. Fenton, Linden, Argentine, Atlas Twp, and hopefully still Grand Blanc. Flushing is another major area. We also need to stop the bleeding in Davison (Michael Moore’s homeown).

Hopefully some more ground can be made up here with the auto bailout being less of an issue with Obama gone. Bush got this district under 60% Dem and in order to win statewide, that needs to be done again.