Update 2014 - It will be a rematch between Candice Miller and Chuck Stadler.

Notes – Sterling Heights reprecincted between 08/12. About 2/3 of Sterling Heights is in the 9th, with the rest in the 10th. Sterling Heights overall is about 1% more dem than the portion in MI-09.  As Sterling Heights is the 4th largest city in Michigan (Warren is 3rd), that throws off the vote spreads in 2008 and 2004, so I didn’t include them. I split the city 2/3 and 1/3 and added 200-300 R Votes and subtracted 200-300 D votes in my estimation. Caro in Tuscola County incorporated which changed numbers in Caro, Indianfields Twp, and Almer Twp. Indianfields Twp flipped to Romney, although Caro was blue. On the map, Caro wasn’t incorporated as a city, so I moved the two townships one color towards the dems.

This district is safe for Candice Miller. It’s also a Republican district on paper. On paper. In reality, this is a conservative leaning but volatile district (both North Macomb and the thumb). Areas McCain won voted dem for state rep here in that same year. 2008 elected Jennifer Haase and Terry Brown. Brown won again in 2012. John Espinoza was another dem state rep formerly representing Port Huron and Sanilac County. He won Sanilac County (The most R at the top of the ticket among Thumb Counties), so it wasn’t Port Huron outvoting its neighbor. Even usually solidly republican Lapeer County (up and down the ticket) recently used to have at times dem state reps. Without Miller, I’d call this district lean R due to a stronger than you’d expect democrat bench. John Espinoza and Terry Brown would be strong candidates. Mark Hackel would be tough if he was in this district (Sterling Heights). There’s no shortage of strong R candidates either like Mike Green, Phil Pavlov, and Pete Lund among others. This district doesn’t vote for social liberals. 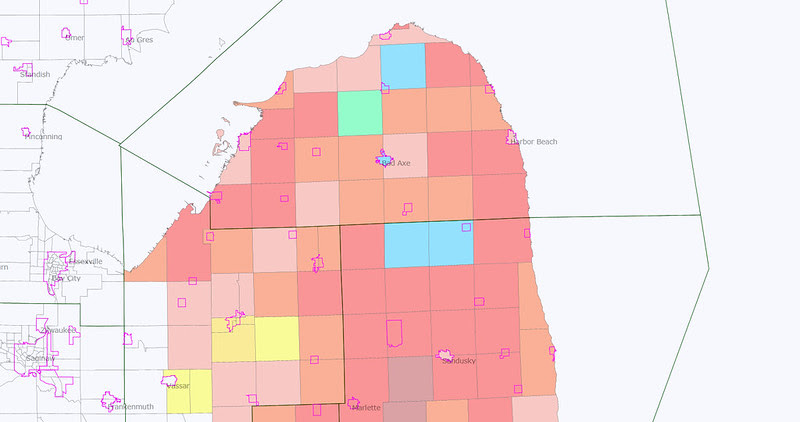 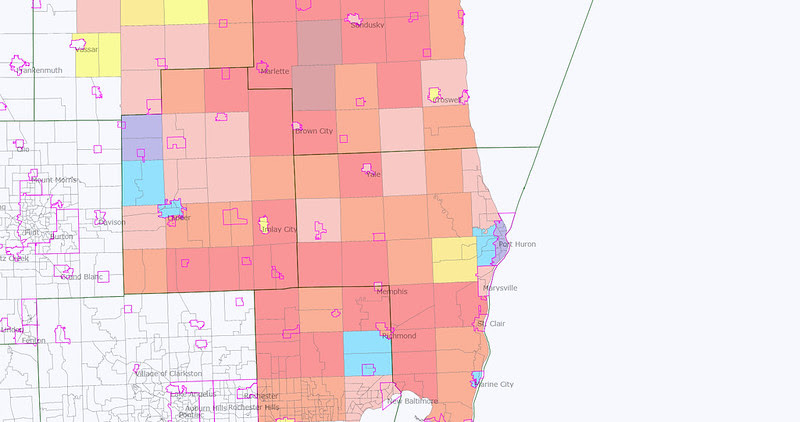 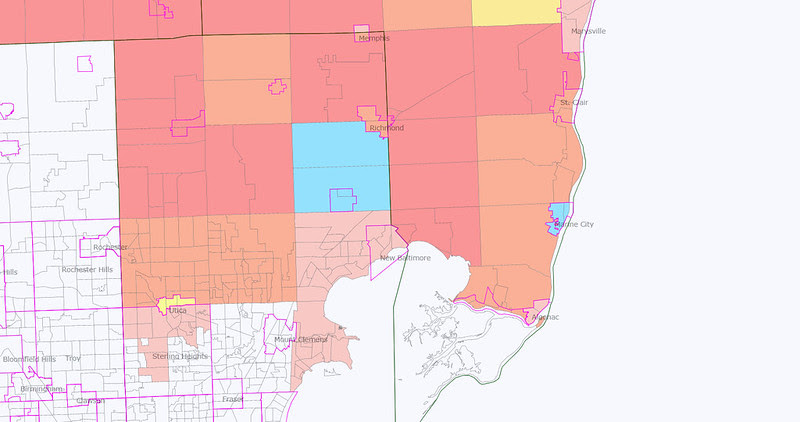 Thumb voting is erratic and usually doesn’t have a set pattern. Starting with Huron County at the tip of the thumb. It’s an independent area that’s the home of Terry Brown. The only areas Romney lost are Bad Axe (swings) and Dwight Twp (always dem, but Romney almost won it). He tied in Meade Twp which is usually dem. Several John Kerry areas here went to Romney who did better here than Bush (older voters?) by percentage. Lake Twp, Harbor Beach, and Port Austin Twp flipped.  It’s often about 55% R at the top of the ticket in non-wave years, but it’s all about candidate quality in these parts. These are true independents and ticket splitters.

SW is the marginal county of Tuscola, which is probably the most pro-labor part of the thumb with its Bay/Saginaw influence to the west.  It’s often about 52-53% R at the top of the ticket, although usually only goes D downticket. McCain won it barely (but lost the part in MI-10). The area between Saginaw and Caro isn’t easy for us. Indianfields Twp “flipped” due to Caro being incorporated as a city. It’s close in non-wave elections. Romney won the rest of the county in the district, which Bush didn’t even do, but Bush did better in enough areas to get a slightly better percentage here. This is an independent area. Terry Brown did well here, as did Jim Barcia. Mike Green is from here and runs very well here.

East of Tuscola County is the safe on paper Republican Sanilac County. It’s often a top of the ticket stronghold, but can’t be taken for granted. John Espinoza won here, and I think Barcia did as well. Romney got 59% here. Bush got 60%. McCain was held to 52%. McCain lost a bunch of areas here. Bush lost one (Croswell) which Romney won. Romney lost Austin and Minden Townships which Bush won. That SE portion needs to be watched.

SW is Lapeer County.  It was a much more competitive county at least downticket a few years back. It’s become solidly R for the most part with a big of North Oakland County influence moving in around Metamora and Dryden Twps. There is a counterbalance here with the Flint area. Marathon Twp is solid D, and Oregon and Elba Twps south of there bear close watch as well. The City of  Lapeer is close as well. Arcadia Twp shows trouble as well for some reason. Romney didn’t do much different than McCain there (54% - down from 59%). Just north of there is North Branch Twp. That’s trouble as well. 58% Bush, 48% McCain, 52% Romney. Bush got 58% in this county in 2004, about a 5% increase from 2000. McCain was held to 50%. Romney got it back to 55%. The question is this. Will Lapeer County start voting more like North Oakland or like East Genesee? Or both? It’s a county we need to win big to be competitive statewide.

East of there is the longtime swing St Clair County. It may be starting to go our way consistently in non wave years after going for Clinton and some downticket dems (notably Bonior). Romney lost four areas. Bush lost three in 2004. McCain lost 10 (and the county). All lost Port Huron, Port Huron Twp, and Marine City. Those are solidly dem areas, especially Port Huron. Kimball Twp often goes democrat, but Bush won it in 04. Burtchville, Marysville, Fort Gratiot, Yale, and Algonac aren’t easy although Bush and Romney both won them. This is a key county for us, especially as Macomb is starting to heavily influence this area, especially around Algonac. Some of the best R areas are along the Macomb County border.

Lastly, North Macomb. Every pundit knows about the “Reagan Democrats.” Macomb County is generally populist, but that’s only part of it. Northern Macomb also has a lot of money and ex-Oakland County residents moving there. Shelby Township borders Rochester Hills as much as it borders Sterling Heights. It is the major R base in Macomb County. Unfortunately, we lost some ground there by percentage compared to 2004 when Bush broke 60% there. It's back to 2000 percentages. It’s fast growing and needed. Macomb Township next door is also solidly republican, but to a lesser extent than Shelby Twp. Armada Twp needs to get back to 60% as well. Ray Twp, Bruce Twp, Richmond, and Washington Twps are still strongholds. That bright blue spot is Lenox Twp. It’s long been democrat, but not as much as it was. The New Haven area has long had a sizable black population there. Bush won Lenox Twp in 2004, but it usually goes dem. South of there is Chesterfield Twp, New Baltimore and Harrison Twps. They lean R, but not always and usually under 55%. Part of Sterling Heights is in the district. Romney won this portion, although not by a big margin. Bush won it twice and we need to win it back. Macomb is still tricky at times however with ethnic and clique voting. Polish, Italian, and German names are often still an advantage, as is being in the right establishment. It’s a different world of politics than much of the state.

This district has trended R compared to the 90’s, but I still can’t call it completely safe if Miller leaves. It’s one that should be ours on paper, but I’ve seen too many surprises with both Macomb and the thumb.

Great blog. All posts have something to learn. Your work is very good and i appreciate you and hopping for some more informative posts. IRS Fresh Start Program