Update 2014: Dingell's retiring, but his wife's running for his spot and is the frontrunner. Terry Bowman is an interesting candidate here. He's a union member and does not support the leadership at all. He can make inroads with swing voters many other Republicans can't do.

Notes – Dearborn Heights reprecincted. Scio Twp did between 2004 and 2008.

This district is a blue sink that combines Downriver labor democrats with Ann Arbor leftists. It did what it was intended to do and that is to pick up as many democrats as possible. 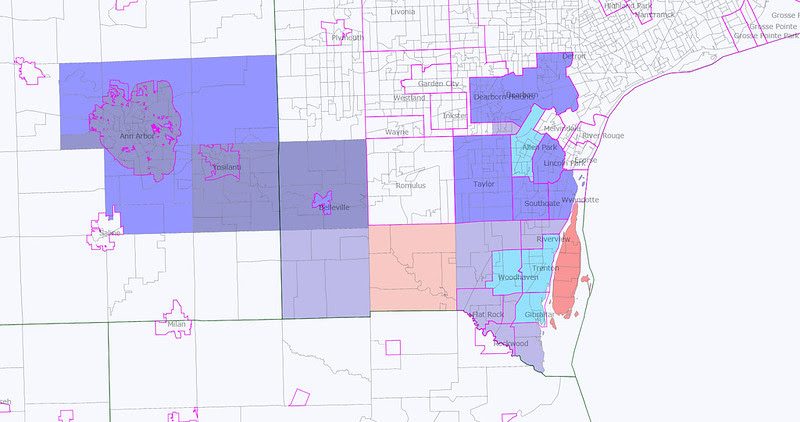 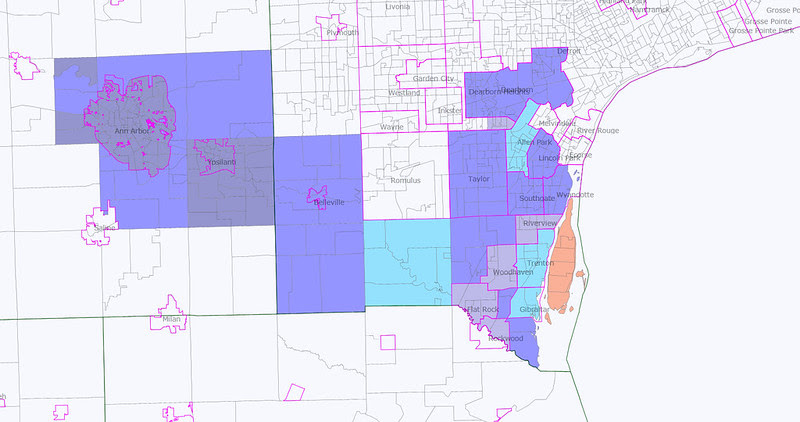 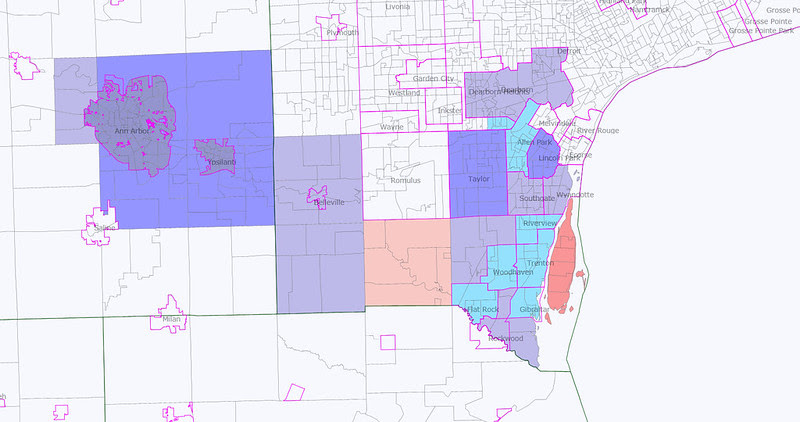 The Washtenaw County portion is centered on two areas. Ann Arbor and Ypsilanti. Ann Arbor is best described as an East Coast academia city placed in the Midwest. University of Michigan is considered one of the backup schools on the East Coast for those who don’t go to an Ivy League. One of its nicknames is the City College of New York – West. The politics in A2 are divided between townie democrats which more often tend to be Bill Clinton types, and radical feminists and greens like you’d expect to see get elected in academia. Republicans haven’t been competitive in the city in years. Occasionally in the past they had a council seat or even the mayor spot, but they aren’t even considered anymore as dems win across the board here. It’s 75-25D consistently, and with Obama it’s 80/20. The township is less dem, but still 2-1 and ceased being competitive with the apartments built up on the southern edge of the township. Eastern Scio Twp is basically a western extension of Ann Arbor.

Ypsilanti (usually called Ypsi) is also a college town (EMU), but has a much different history. It was also a GM town.  One of it’s nicknames was Ypsi-tucky due to a large number of Appalachian transplants who worked in the Willow Run auto factory. Willow run closed down, but the union influence here remains. Ypsilanti (both city and township) also has a large black population. Romney absolutely bombed in Ypsi. He did bad in Ann Arbor, but at least improved over McCain. Romney had less votes in Ypsi, and in the township, had a worse percentage. Obama took 83% in the City and 74% in the Township. Superior Township to the north is safe dem because of its portion of Willow Run. Three precincts in its southern end are 69%+, including one that’s 90%+ and black majority. It’s large enough to put the township 60%+ D. Pittsfield Twp is one part Ann Arbor, one part Saline, and one part Ypsi in influence. It’s also safe democrat, with a large Asian (not sure Indian or East Asian or both) population in the portion between Ann Arbor and Saline. The east part of Pittsfield twp is heavily minority and EMU influenced.

South of there is Sumpter Twp. It’s been consistently 58-62% dem and hasn’t changed much. East of there is Huron Twp which has moved our way some. Gore won it, then Bush, then Obama, and now Romney. It’s always close. East of Huron Twp is the southern part of Downriver. It’s dem, but sometimes we pick off a state rep district here. Grosse Ile and occasionally Huron Twp carry the district. Grosse Ile is 60%+R. Trenton, Woodhaven, and Gibraltar are narrowly democrat. In a great year or with a great candidate, one can flip them. Unfortunately, Romney was a bad candidate here in particular. He got less votes than McCain in Trenton and Gibraltar. Rockwood, Flat Rock, and Riverview are harder. Strangly shaped Brownstown Township (unincorporated and split in 3 sections) is strongly and stubbornly democrat. The north part of that township might as well be part of Taylor.

Northern Downriver is union country and still retains the traditions. It’s largely white ethnic and Appalachian, although the minority population is slowly increasing, particularly Mexicans in Lincoln Park (borders SW Detroit) and blacks in Taylor. Taylor, Lincoln Park, Southgate, and Wyandotte are all 60%+ dem, and they are getting bluer. Romney was a real bad fit here, and had less votes in all four of those areas than McCain. Obama had a higher 2012 percentage in Taylor, Lincoln Park, and Southgate. Was that due to “Let Detroit go bankrupt?” Probably. North of there is somewhat competitive Allen Park. It’s winnable in a great year. 2012 wasn’t it.

Lastly, Dearborn. Dearborn is and has been usually democrat and the home of Dingell. Bush did win it however in 2000. Then the Iraq War happened. Dearborn is about 40% Middle Eastern (not all Muslim), mostly in the Eastern end. Western Dearborn is largely white ethnic. It’s Ford HQ, and has a mix of union and auto executives. In 2004, Kerry flipped it in a big way getting 58%. McCain and Romney cratered here. Romney did worse than McCain. Obama got 65% in 2008 and 66% in 2012. Obviously a lot work needs to be done.

This district does what it was intended to do. It packs democrats. Rob Steele made a good run at a similar district in 2010, but was unable to counter the traditions. What we need to do here is get the best we can get and try and pick off a state rep district here and there like the far downriver seat in 2010. We need to cut down the margins of dem victory here and make up the ground in other districts.

I have found that this site is very informative, interesting and very well written. keep up the nice high quality writing IRS Installment Agreements