Update 2014:
There will be no primary. Ron Paul Republican George Brikho is battling Sander Levin.

Outside of a miracle year for us, this is a safe democrat district even if Sander Levin retires with his brother, likely getting safer with migration. Redistricting made this district less democrat than it was, but not enough to put this in play. It was meant to keep Peters from going for the 11th District and was a little overly cautious IMO. 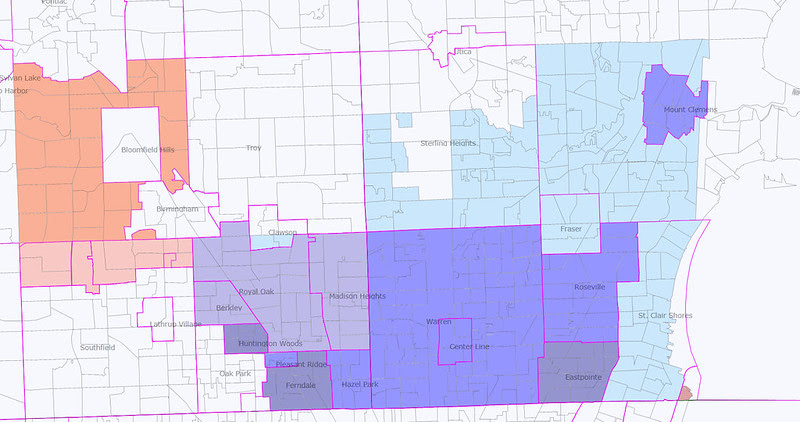 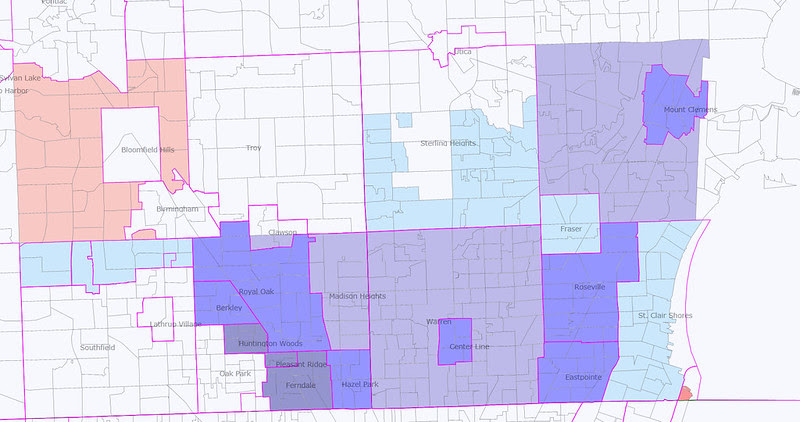 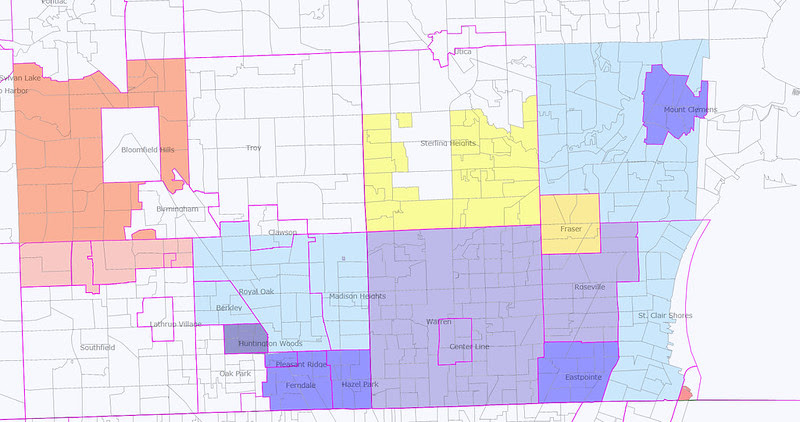 Starting with Oakland County, Bloomfield Township is the odd municipality out. It’s the home of Gary Peters, but a Republican area. Romney grew up either here or in next door Bloomfield Hills (in MI-11). Bush (58%) did better than Romney (57%) here, and McCain didn’t do well here barely winning it with 52%. South of there is Southfield Township, except nobody outside of election result followers call it Southfield Township. Southfield Township has nothing to do with Southfield outside of being a neighbor. It is the combination of three villages - Bingham Farms. Franklin, and Beverly Hills. They are all highly affluent areas. Bingham Farms is largely office buildings along Telegraph. Southfield Township leans slightly Republican, although Obama won it in 08. East of there are the “slateblue” colored Royal Oak, Berkley, and Madison Heights. They are all bluing areas (and yuppie in Royal Oak and Berkley’s case), although Romney controlled the bleeding some. Bush kept them all under 55% in 04, but Bush did worse there in 04 than in 2000 unlike most of the state.  Obama cracked 60% in Royal Oak and Berkley (and 59% in Madison Heights) back in 08. Romney cut the vote spread deficit from 8500 to 6000 in Royal Oak and 2150 to 1700 in Berkley. It was 3600 and 712 for Bush who was not a cultural fit at all for Royal Oak and Berkley. Madison Heights is trouble. Romney improved his percentage from 38 to 39% there, but had less raw votes than McCain. I haven’t figured that city out.

The major dem base here is the SE end. Huntington Woods is south of Berkley. It’s possibly the most socially liberal part of Michigan outside of Ann Arbor. Romney actually did better than Bush here with 28.79% and 1240 votes. McCain had 24.02%.  Pleasant Ridge next door isn’t much different except less Jewish. Romney didn’t do as well as Bush here, but better than McCain - 31.59% for Romney to 27.61% McCain and 36.23% Bush. Ferndale next door is the gay capital of SE Michigan. It’s also gaining blacks from Detroit with migration. It took Huntington Woods and became the most dem part of Oakland County that isn’t minority-majority. Romney did worse than McCain here in both raw votes and percentage. 67.87% Kerry, 74.85% Obama 08 and 75.96% Obama 12. Hazel Park is either getting influenced by Ferndale or Detroit. It was historically blue collar white. It’s going the same way as Ferndale. 60.62% Kerry. 64.56% Obama 08 and 66.52% Obama 12. The pundits love to talk about the “moderate” in Oakland County voters. This area (like MI-08 for opposite reasons) isn’t it. You have more of that in parts of MI-11.

The majority of this district is in Southern Macomb County. It’s also democrat, although a much different type of democrat than you’ll get in Ferndale or downtown Royal Oak. It’s UAW country. Southern Macomb County is also changing in migration. It showed in the election results of Warren, Center Line, Roseville (which long had an established black population) and Eastpointe. Obama did better by percentage in all of those areas in 2012 than in 2008. That’s due to black migration in, and white migration out.  It’s not just Polish and Italian there anymore. Warren – 55.60% Kerry, 59.34% Obama, 61.19% Obama. Center Line 58.21% Kerry, 61.78% Obama, 63.02% Obama. Roseville 59% Kerry, 62.81% Obama, 63.57% Obama. Eastpointe 61.87% Kerry, 69.05% Obama, 73.82% Obama. Eastpointe will likely be black majority in five years. East of there is St Clair Shores which is still heavily white ethnic. Romney lost raw votes there but gained a percentage point over McCain. It’s been very stable in presidential elections ranging between 50-52% dem. It’s more social conservative. In the SE Corner is a small portion of Grosse Pt Shores. It used to be Lake Township and was annexed. That’s the firebrick spot in the corner.

Northwest of there is Sterling Heights, an area to watch. Bush won it twice narrowly overall. I’m not sure if he won the portion in the district. It was real close. Romney lost it narrowly as Obama got 50.4% overall and 51.35% in the district portion. It’s long been a swing area with a mix of white ethnics (Poles, Germans and Italians), Chaldeans, Middle Eastern Christians, and a gaining Indian and black (less so than Warren) population.  It’s an area Republicans need to win back at the top of the ticket to be competitive in Michigan.

East of there is Fraser, Clinton Township and Mt Clemens. Fraser is competitive, but leans labor dem. It’s usually close. Mt Clemens is dem, and has until recently been the most democrat part of Macomb County. It’s Bonior country. It’s shrinking population and Romney had less raw votes there than McCain although gained in percentage. Obama still got 66% there twice due to labor and minorities. Clinton Township is erratic with some base areas on both sides. Overall it leans democrat, but there are some bigtime R precincts there as well as bigtime D precincts there. The eastern part of the township is bigtime dem due to labor and minorities. The western part is more republican leaning. Bush almost took it in 2004, but it wasn’t that close for Obama. Was that due to a higher turnout in the eastern part of the township? I don’t know. It’s an area we need to reduce our margins in to compete statewide.

This district was intended to be a blue sink and it does its job there. Berkley, Pontiac, Farmington Hills, and Royal Oak were Knollenberg’s downfall. Royal Oak and Berkley are now here. SE Macomb was put here to push Bonior’s retirement/gubernatorial run. Bonior ran big in St Clair Shores and Easpointe. R’s don’t need to win the district to be competitive statewide, but need to come close. Sterling Heights, Clinton Township, and St Clair Shores are three major keys. Those areas need to be won to win statewide. It’s been done, so it’s not impossible. Congressionally, the only one I see with a chance (and an outside one) with the right opponent is Tory Rocca who is a state senator who won a district he had no business winning in 2010. (Roseville, Sterling Heights, Frasier, Clinton Twp, Utica). Unless I see a 2010 year and a matchup like that, this is safe dem.

I have found that this site is very informative, interesting and very well written. keep up the nice high quality writing Tax Lawyer Brighton