Dems lost due to Gerrymandering? BS!

The leftists and their media allies are blaming gerrymandering for their 2014 losses in the state house. From the Macomb Daily's Chad Selweski

That's their talking point. That's pure BS in the lies, damn lies, and statistics area. What Selweski doesn't get is the following.

2. Geography. Obviously, votes aren't spread out evenly across the state. State rep districts range from about 77,000-91,000 per district.

3. Self Packing. This is the big one and relates to geography. Most of the Michigan democrat vote in this state is clustered. Detroit. Upper Downriver. Metro Airport area. South Macomb. Southeast Oakland. Pontiac. Ann Arbor/Ypsi. NW Ingham County. Flint and Northern Genesee suburbs. Saginaw. Kalamazoo. Grand Rapids (City). Muskegon. Marquette. Bay City, Battle Creek and Jackson to a lesser extent. That covers most of it. When these democrats pack into an area on their own, funny districts don't need to be drawn to get skewed results.

Here's the straight ticket vote from Oakland County as an example, by precinct. Straight tickets went 50-49% dem in Oakland County this year. The vote is clustered. Pontiac, a little of Auburn Hills, and a small part of Waterford (competitive, more GOP than not overall). Then you have Southern West Bloomfield, Wixom's village area, some apartment areas of Novi, and Eastern Famington Hills in one area. Then there's Southfield roughly east to the county line. This is self packing. All of Pontiac is in a district. Auburn Hills is with Pontiac. That makes perfect sense. Farmington Hills is in a district to its own (with Farmington), as is Southfield. Royal Oak I believe has next door Madison Heights. The SE cluster is all together as well in a neatly shaped district. That's gerrymandering?  Some of those districts haven't changed for years. 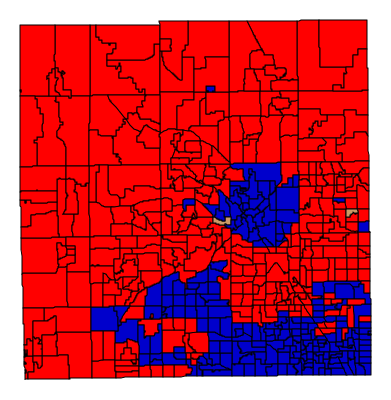 4. APOL Standards.
Here's the general guidelines for state legislature districts.  You also have federal issues regarding race, etc that factor into some of the Detroit district shapes.


This stops the dems from baconstripping districts from Detroit to Livonia or Livingston County for that matter to get these districts to fit the results they want. This goes back 20 years due to some of the 1970's and 1980's era democrat gerrymanders out there. Some of these aren't "perfect" in their breaks, but county breaks and municipal breaks are fairly uncommon in these maps.

As long as democrats self pack into places like Detroit, there's going to be skewed results between popular vote for an office by party, and the winners by district. There's nothing wrong with that as we have DISTRICT offices as well as state wide offices.

It wasn't quite as much of a blowout as some thought. A lot of the education board seats were thought to be won by the GOP until the next morning - when Wayne County came in. Melanie Foster won her seat back on MSU, but that was about it. Jeff Sakwa's loss hurt (and surprised me). He would have done a great job there. I'd like to see the straight ticket level taken out. End it. It helps to an extent in Livingston County, but hurts us all statewide.

Closer to home, we had some blowout wins here, despite spirited challenged by the dems.

Our new Congressman is Mike Bishop.


Bishop was very strong in his home area and did well in Livingston County where he worked quite hard. I didn't see or hear much of Schertzing working outside of simple "Generic D" push in Livingston or Oakland. I did hear he worked hard in his home county and it showed. Bishop's campaign folks wanted Mike Rogers numbers out of Livingston County, but that's tough to do. He did get about the same Rogers got in 2000 however. Putting it into that perspective, means there's plenty of room for growth. I like Mike going back to his 2010 Attorney General campaign and think he'll do a good job for us.

State Senate and State Rep
Joe Hune was easily re-elected despite an $80,000 challenge and high profile (locally) mudslinging from Shari Pollesch, assisted by LC Dems. He won all municipalities except two in Washtenaw County - City of Chelsea and Scio Township (and the one vote in the City of Ann Arbor). Shari Pollesch's campaign is crowing about winning the Washtenaw County portion of the district, but that's due to Scio Township's votes. Scio Township is Ann Arbor west and has been democrat for about 20 years. It's also the largest part of the Washtenaw portion of the district.

Dr Henry Vaupel easily won his open seat against Jordan Genso. Vaupel and Hune worked together on the campaign quite often, especially in the primary (for Vaupel). Vaupel got 20,995 votes and 69% in his district to Genso's 8086 votes. Genso didn't run a very active campaign from what I've seen, and didn't nearly have the campaign money that Pollesch had. Lana Theis easily won his open seat against Timothy Johnson. She got 23477 votes and 65%  to Johnson's 12544 votes. Johnson ran a more active campaign than Genso in regards to signs and money, but Lana outworked him quite heavily and hit thousands of doors. It showed in the results.

Going back to Joe's senate election. Pollesch worked hard. She claimed to hit 19,000 doors. I have a hard time believing that number (due to bragging about 100 doors in at least 1/2 of a week), but I could be wrong. She raised money, and got a bunch of signs out (although signs don't vote). She didn't outwork Joe (nobody does), but she ran a tough campaign. How much did that move the needle? Not much. You have to know your district and your county. To put it bluntly - if the product sucks, the people aren't going to buy it.

Why? The product sucked. Bigtime. After that slime campaign, you can better believe that I'm gloating. From an ideology standpoint - Higher taxes. Higher spending. F rating from NRA. Massive regulations in the name of global warming. Tax funded abortions. That isn't in the mainstream of this state, nor is it the mainstream of center-right Livingston County. From a non-ideology standpoint, negative bashfests and slime campaigns are almost never rewarded in this county. That stuff works in Eastern/Central Oakland and Macomb, not here. There is a very strong "Don't crap where you live." mentality in these parts. We have a good community, worked hard to keep it that way, and don't want this crap to contaminate it. The people saw through that as I expected, and the results are what I expected.

On the commissioners level, no democrats broke 40%. Katakowski came close in the 8th district (Mostly Hamburg). He ran the strongest campaign and from what I've heard didn't really go negative. Mike Tipton barely cracked 35% despite the most active campaign. He has some of the same problems that Shari Pollesch had on the trail and got similar results (Pollesch got slightly under 33% in the county).

I'll have more on a macro level regarding the state later. On the county level, we did well, especially considering three open seats. It starts with candidates. Mike Bishop, Lana Theis, and Doc Vaupel are good recruits for the open seats. Bill Schuette, Ruth Johnson, Joe Hune and the Commissioners are good incumbents. Rick Snyder came through in the end to get enough coattails - at least outstate, to get a few of our folks over the line.

On to the presidential cycle. .

After this election cycle, I'm spiking the football Gronk style, and I'm not even a New England Patriots fan.

It wasn't perfect. I wish Terri Lynn Land, Dennis Brewer, Judge James Robert Redford, and Jeff Sakwa (and rest of education boards) all won, but the results were overall good.

Mark Schauer can go back to getting pepper sprayed at Right to Work Protests.

Shari Pollesch's slime campaign against Joe Hune and his family got the results that were warranted. 80K was wasted and it wasn't all that much closer than Chuck Fellows campaign in the 2010 wave year. That's worth the spiked football alone.

All nine County Commissioners were re-elected. Don Parker got 60% against Mike Tipton, the loudest critic of the board. That's worth a spiked football on its own as well.

This is despite the union leadership spending a ton of money on political hit pieces, "member communications" that were expensive hit piece mailings, and annoying phone calls (both sides guilty of those damn calls). That deserves a spiked football as well.

I'll get to the details later with a full report.
Posted by Dan at 8:07 PM 2 comments: